Central Park is not the center of New York. New York has no center, or more accurately; its center is dynamic and ever-shifting. It is constantly moving like the subway trains. So while Central Park is in the middle of the city, it is only the uninitiated that considers it the center.

Another mistake is viewing Central Park as an island of green and nature in an urban sea of pavements and skyscrapers. The romantic separation of Central Park from the rest of the city is fictitious. Do not let the trees and grass deceive you; this is an urban park, and it is constructed as much as Times Square is. New York never stops, not even for some greenery.

One of the main attractions of Central Park is the Central Park Zoo. It is the oldest zoo in New York, and while it is not particularly large and its collection of animals is not as impressive as other zoos, there is still a special delight in crossing the threshold and entering this different world.

Central Park is an organic part of the city, but the zoo feels like its own entity, like it exists in its own separate dimension. You stroll around looking at the birds and lemurs. You gaze at the polar bear swimming. You try to catch sight of one of the snow monkeys, and all the while, the city fades from your mind.

It is best not to get a map when you arrive at the zoo. Wandering around and discovering the animals at random is much more enjoyable experience. Maps and directions are for the city, not the zoo. Turning the corner and suddenly finding a favorite animal from your childhood is a great treat.

All in all, the Central Park Zoo is not a bad way to spend an afternoon, whether alone or with the family. Indeed, there are worse things to do than watching some animals play.

Check out this Exotic Bird! 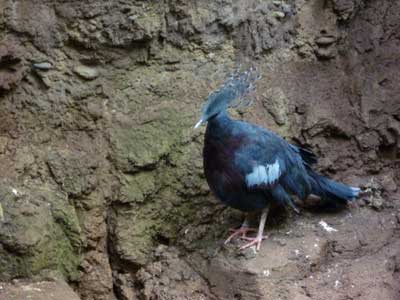 It’s too hot for White Bear!

Check out these monkeys 🙂

What are your thoughts about the Central Park Zoo?