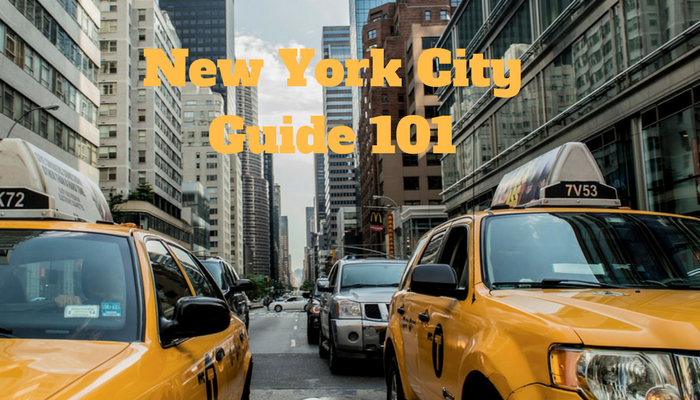 New York City is one of the most popular destinations in the world, with a population over 8.5 million. It is also the most densely populated and ethnically diverse metropolis in the United States. It has a long history of international immigration is often called “the capital of the world”. There are as many as 800 languages are spoken in New York which makes it a truly multicultural and very exciting place to live and visit.

The New York City is mostly known for Broadway, Times Square, bridges and skyscrapers . However, there’s so much happening here all the time that it’s hard to run out of options.

For many visitors, New York seems full of glamour and luxury. It’s where movie stars live, where the most fashionable clothing comes out, and where some of the best universities are located. But given its size, there is always something new to discover about the Big Apple.

The purpose of this New York City Guide is to provide an overview of NYC history and background, geography and climate, best of New York City attractions, things to do, shopping and more.

The history of New York is fascinating. New York was occupied by Native Americans, some of which can still be found here. The tribes were mostly divided into Iroquois and Algonquin. The Wampanoag and Lenape controlled Long Island in half, while the Lenape also controlled most of the New York Harbor area.

There was another Algonquin nation north of the Lenape: the Mohicans (The Last of the Mohicans – a fantastic movie). The three Iroquoian nations were the Mohawk, the original Iroquois and the Petun. Other nations roughly along Appalachia were the Susquehannock and the Erie.

Down the centuries, these tribes were wiped out in battles with European forces. When the Indian Removal Act was drafted by the US decades later, the Lenape were moved to Missouri, and the Mohicans to Wisconsin. Later, European traders started arriving in the 16th century.

There were the French and the Dutch, who started building harbors and trading ports. Many traders also did business with the local tribes like the Lenape and the Iroquois.

In 1626, the Dutch colonial Director-General Peter Minuit, acting as charged by the Dutch West India Company, purchased the island of Manhattan from the Canarsie, a small Lenape band,for 60 guilders (about $1,000 in 2006). A disproved legend claims that Manhattan was purchased for $24 worth of glass beads Source: Wikipedia

Much later, the British took over New York.

It wasn’t until the 18th century that the American Revolution took place. The Sons of Liberty were formed in New York City during the 1760s, in response to the Stamp Act passed by the British Parliament in 1765.

This paved the way for Independence and statehood for New York. However, since there was a strong trading tie between Britain and New York, most New Yorkers did not want independence.

After the American Revolutionary War and the Battle of Long Island, the state constitution was enacted in 1777. New York became the 11th state on July 26th, 1788.

New York was one of the 13 original colonies and states of the US. New York City was free on November 25th, 1783 when the last British troops left. After the departure, US General George Washington triumphed into the city as the New Yorkers cheered.

Between 1785 and 1790, New York City became the first capital of the United States. In 1789, it was where George Washington was inaugurated as the first US President. New York City remained the capital until 1790.

Several major events took place in the following years. The New York Stock Exchange was founded in New York City in 1792. In January 1797, Albany became the capital of New York. The year 1827 was an important milestone when New York outlawed slavery.

At the time New York had more anti-slavery organizations than any other US state. In the 1860s, New York supplied a sixth of the forces during the Civil War. You can see some of this in the amazing movie Gangs of New York.

New York has a burgeoning skyline, and the first ever skyscraper was built in New York City in 1902. It was the 21-story Flatiron building at 23rd Street and Fifth Avenue.

Only two years later, New York added another feather to its cap as the first subway line, called the IRT, opened in 1904. In a historic 19th Amendment to the US Constitution, women were given the right to vote in 1920.

But superseding everything else is the terrorist attack on 11th September 2001 that destroyed the twin towers of the World Trade Center and killed over 3,000 people.

The attack changed the scenario in the US and brought about fear, hatred, and xenophobia. In response to the attack, the NY Stock Exchange closed for four days— the longest since 1933.

It reopened on September 17 in a show of solidarity and resilience and set a record volume of 2.37 billion shares. Today, there is the National September 11 Memorial & Museum at the World Trade Center site, near Shanksville, Pennsylvania, and at the Pentagon, in memory of the victims of the attacks.

Despite the tumultuous history, New York continues to rule and attracts millions of visitors every year.

The landscape of New York is diverse. New Jersey and Pennsylvania border the state on the south, while Connecticut, Massachusetts, and Vermont are on the east. Along the Rhode Island, and east of Long Island, the state has a maritime climate, while sharing an international border with the Canadian provinces of Quebec and Ontario to the north and the northwest.

The New York climate is humid continental, while the New York City region has a warm humid subtropical climate. Summer is from June to early September for the most parts in this state, while regions in southern New York and New York City have summer late May to late September.

Between October and April is when most of the rain occurs. Winter begins in November and prevails until April in the northern parts of New York, and from December to March in the southern regions which includes New York City. Winter temperatures go below freezing point in most parts of the state except the coastlines.

Manhattan is the most populated borough in New York, and is also the administrative and economical center of the state. Manhattan is often referred to as The City.

The borough of Manhattan Island is surrounded by the Hudson, East, and Harlem rivers. Three of the most famous attractions of New York are located in Manhattan: Times Square, Central Park, and Grand Central Terminal.

The Brooklyn Bridge and the Empire State Building are also located in Manhattan.

The third most populated county of New York, the Bronx lies south to Westchester County, north and east of Manhattan, and north of Queens. In the 19th and 20th century, Bronx had a huge immigrant wave, from European countries like Germany, Italy, and Ireland, and later from Puerto Rico, Haiti, Jamaica, and the Dominican Republic.

There were immigrants from the southern part of United States too.

This immigrant wave not only turned Bronx into an urban community, the cultural mix also made the borough a hub of hip hop and Latin music.

Some of the major attractions in Queens include Flushing Meadows Corona Park, Citi Field, the US Open tennis tournament, Silvercup Studios, and Aqueduct Racetrack.

Queens also has the most diverse economy among all the boroughs of New York.

Brooklyn is another of the most populous counties of New York City, known as the destination of hipsters. The borough is also famous for a number of attractions such as Prospect Park and Coney Island Luna Park

The borough feels like a city in itself because of the population.

Staten Island is often referred to as the forgotten borough, because it is so disconnected from the rest of the state. It is the only region in New York that is not connected to the New York City Subway system.

You will never run out of things to do in New York as several major attractions draw millions of people from every corner of the world. The state of New York has always been associated with luxury and glamour, and the upscale atmosphere of the place is a major hit with people across the globe. Some of the major attractions of New York are:

The Statue of Liberty: Received as a gift from the French, the Statue of Liberty is one of the most famous icons of the US, and also of New York. No trip to the US or to New York is complete without seeing the statue. There is a ferry service to the statue that gives a better view of the icon.

Central Park: This huge, mile-long park in the center of New York City is one of the things that make this place such a huge tourist draw. You can walk, peddle, or take a carriage ride through the meandering lanes of the park, which also has a number of attractions within itself, including the Belvedere Castle, Strawberry Fields, the Central Park Zoo, and the Lake.

Central Park Video – New York’s Central Park is one of the most famous parks in the world.

Broadway: Considered the pinnacle of American theater, Broadway is a must-visit on everyone’s list. At any time of the year, visitors can catch a number of latest shows and long-running classics at the theater. There are also a number of other theaters in the Theater District and along the street of Broadway.

Broadway, NYC Video – considered to be the heart of New York City.

Times Square: Lit up with huge, brilliant billboards, Times Square is best experienced in the evening, but is a bustling center of activity at any time of the day. This is where New York’s New Year’s Eve Celebrations takes places, when crowds of people gather to celebrate.

Times Square is always crowded but has its own appeal nevertheless.

Times Square Video – The “Crossroads of the World” draws 50 million visitors a year, the most of any US attraction.

Approximately 4,000 people walk across the Brooklyn Bridge daily. The span is around 6,000 feet long.

Grand Central Terminal: Also known as the Grand Central Station, this is a remarkable Beaux Arts building that’s also a historical landmark. It first opened in 1913 as a terminal for the subway and train stations. Now it has been flooded by homeless people though which is very sad.

Wall Street: Inspiration for several movies (including the eponymous Wall Street movie), Wall Street is the place where some of the most important exchanges of the world are located, including the New York Stock Exchange, the

Some of the other popular attractions include the New York Public Library, the Empire State Building, Radio City Music Hall, St. Patrick’s Cathedral (a holy place that everyone should visit, respect, and understand), NASDAQ, and the New York Mercantile Exchange and the Metropolitan Museum of Art.

The fashion district of the US, New York offers plenty of opportunities for both budget and luxury shopping. Fifth Avenue is the most prominent shopping street in the US, where many top designers have their flagship stores, including Cartier, Tiffany, Bergdorf-Goodman, and Saks Fifth Avenue.

Non-shoppers too can enjoy the view while taking a walk down the street. The best area of the Fifth Avenue runs from the south end of Central Park to the New York Public Library.

New York is a multicultural and multi-ethnic state, with people from various parts of the world living here which has been the case for decades and decades. Besides the glamorous shopping center, the glitzy Times Square, or the scenic parks, New York is a remarkable blend of history and culture.

Despite its up and downs, New York City has always proved its resilience and continued being a favorite destination for people from all over the world.

There is so much more to cover in this New York City Guide. Feel free to share your NYC experience in the comment section below!