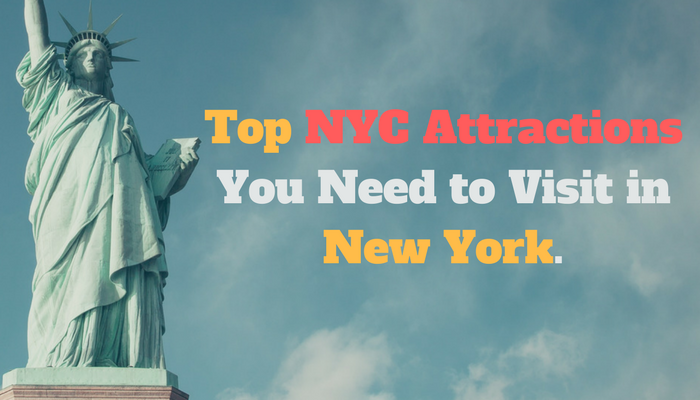 Did you know New York City receives 60 million tourists each year? That’s like if the entire population of only Italy came to visit.

Visiting New York City can be overwhelming if you’ve never been before. That’s why it’s important to go with a list of things you want to see and a rough schedule for when you want to see them.

Planning from scratch can be a pain. That’s why we’ve created this 3 to 4 day itinerary that covers all of the best NYC attractions.

There are two observation decks in the Empire State Building which are open to the public. The main observation deck sits on the 86th floor while the upper deck is on the 102nd observatory floor. These decks provide stunning panoramic views of the city and can serve as an excellent backdrop for family outings or marriage proposals.

The American Museum of Natural History is one of the most prominent museums in the world. It has over 33 million specimens of animals, fossils, plants, human artifacts, and minerals in its collection. That’s enough to keep you busy for years!

While we know you don’t have years, we do recommend you allow at least three hours in the museum to get a feel for what’s there. Before your visit, check out the exhibits online and see which ones appeal most to you and your family. Some of the most popular exhibits include the dinosaur exhibit, the hall of North American mammals, and the Teddy Roosevelt Rotunda.

Video: A quick view at the American Museum of Natural History in New York

Top of the Rock Observation Deck

For a different birdseye perspective of NYC, head to the observation deck at the Rockefeller Center. At the Top of the Rock, you’ll have unobstructed views of Midtown and Central Park. The open-air observation deck sits at 70 stories high. For an indoor observation experience, you can go to the 67th floor. This floor also includes the Radiance Wall, a wall of mouth-blown glass and fiber-optic lighting by Swarovski.

The Guggenheim is the other art museum you need to check out in NYC. It’s a must-see especially if you love Impressionist, Post-Impressionist, and Modern art. The museum has extensive collections of all these art eras and is continuously expanding its collection.

The museum was founded in 1937 and featured the somewhat eccentric art collection of Solomon Guggenheim, an affluent American businessman. The architect for the museum took his cue from Guggenheim’s collection and created the spiral design we see today.

“Give me your tired, your poor, Your huddled masses yearning to breathe free, The wretched refuse of your teeming shore.” These are the words emblazoned on perhaps the most iconic statue in the United States. Immigrants arriving in the United States would sail past Lady Liberty on their way to the immigration office on Ellis Island.

You can experience that same journey with a cruise out to the Statue of Liberty and Ellis Island. You can stand in the shadows of Lady Liberty and walk the halls of the Immigration Museum.

Want to get outside the city to appreciate the Manhattan skyline? Try taking a cruise with Circle Line Sightseeing Cruises. They offer cruises to sail by the Statue of Liberty, see the critical landmarks of Manhattan, and also evening cruises to take in the skyline lit up at night.

Sightseeing cruises are a great way to get off your feet and still take in the sights. They’re a kid-friendly activity, too! If you want to take a cruise, check Circle Line’s website to see its tour schedule.

The day two commercial airliners crashed into the towers of the World Trade Center on September 11, 2001, was the worst terrorist attack that has ever been witnessed on American soil. The country and the world mourned for the 2,996 people who died in the collective terrorist attacks on the country that day.

Our wounds have healed over, and today, we reflect on the scars left in their place in the form of the National September 11 Memorial & Museum. At the memorial, you can visit two reflecting pools which sit in the footprint of the twin towers. You can also visit the museum to learn more about the attacks, artists’ interpretation of the attacks, and the memorial exhibition.

Right near Hell’s Kitchen, you’ll find the Intrepid Sea, Air & Space Museum, a museum dedicated to American military and maritime history. The museum features a collection of decommissioned ships including an aircraft carrier and a submarine. You can also see a Lockheed A-12 supersonic plane and the Enterprise space shuttle. The exhibits, especially the space exhibit, are a huge hit with kids.

How Do I See Everything?

One of the easiest ways to plan your trip to see as many New York City attractions as possible is to use the New York City City Pass.

By purchasing the pass, you get automatic admission into all these sites at a discounted rate. Admissions to all these attractions would run you upwards of $200, but with the City Pass, you can see everything for $122. Plus, you can keep the pass on your phone rather than keeping track of a paper ticket.

Disclosure: This website includes affiliate links and we are compensated if you make a purchase after clicking one of the links.